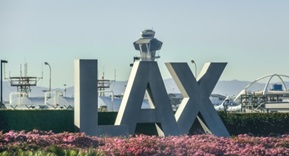 “As Chairwoman of the appropriations subcommittee that oversees the TSA budget, I was pleased by the selection of LAX as the second domestic airport to host the UAS detection technology test bed. Combined with the first test bed in Miami, this program will allow TSA to validate the effectiveness of UAS detection technology in real-world, aviation environments,” said Congresswoman Lucille Roybal-Allard. “While there are many beneficial uses for drones in our society, it is becoming far too common that drones are sighted near airports, which presents significant security risks and unnecessary disruptions to the traveling public. I commend TSA, local law enforcement, and LAWA for their collaborative efforts that enabled the selection of LAX as the second site for this important initiative.”
“TSA’s effort to test technology that will detect, track, and identify drones will enhance air travel safety at LAX and airports throughout the United States,” said Congresswoman Maxine Waters from California’s 43rd District, which includes LAX. “I am so proud that LAX was chosen to test this critical technology.”

“We, too, are pleased that TSA’s drone detection efforts have expanded to LAX. As one of the nation’s busiest airports, this is a prime location to test our existing capabilities that will be used to develop the next generation of DTI technology,” said TSA Federal Security Director Keith Jeffries. “Our strong partnership with Los Angeles World Airports made this day possible. We appreciate its willingness to join with TSA to address what has become a potential safety and security threat to the aviation industry.”

The TSA and LAX have a long-standing partnership working together to find innovative new solutions to passenger safety and security. LAX was selected as a testing site for the latest UAS detection technology test bed due to the airport’s diverse aviation operations, large number of enplanements, frequency of UAS activity, and high passenger volume.

Data collected at the LAX site will help TSA expand this capability to other airports in the future and raise awareness of the risks of encroaching on restricted airspace. The precise location of the DTI technology at LAX is not publicly disclosed.

“LAX has a long history of leading innovation through pilot programs and partnerships with the TSA and the Department of Homeland Security, and our latest collaboration to detect unauthorized drone activity near airports is another leap forward to further enhance the safety of airports across the nation,” said Justin Erbacci, Chief Executive Officer, Los Angeles World Airports. “As a TSA innovation partner, LAX is proud to support emerging technology that is creating a safer, more secure and highly efficient airport for the traveling public.