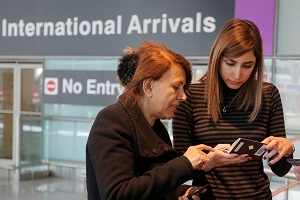 The clock has started to tick on a deadline for foreign governments to meet new U.S. standards for passports and sharing information about their citizens. Failing to meet the deadline risks having some categories of nationals banned from traveling to the U.S.
The State Department on Thursday sent a cable to all U.S. embassies and consulates instructing U.S. diplomats to inform their host governments that the 50-day period has begun for them to meet the new criteria, devise a plan to meet them or face the possibility of travel sanctions.

The 50-day deadline and sanctions threat had been laid out in President Donald Trump’s March 6 executive order on protecting the U.S. from terrorist threats that the Supreme Court partially reinstated last month. That executive order also contained the travel ban for residents of six mainly Muslim nations and the suspension of refugee admissions. Neither the executive order nor the cable was specific about what categories of foreigners might be banned from countries that do not comply.

The new standards involve the quality and integrity of identity documents such as passports as well as sharing information about security threats and public safety concerns. Many nations, including the 38 countries that are part of the U.S. Visa Waiver Program, already meet the criteria, which include biometric, machine readable electronic passports and the provision of terrorism watchlists and other domestically produced intelligence data on citizens who may pose threats. They also include reporting lost or stolen travel documents to Interpol.

It was not immediately clear how many countries might have to adopt new policies to comply with the new requirements. A separate classified cable was sent to embassies and consulates in countries that are believed not to be meeting the standards or that have been determined to be at risk for noncompliance.