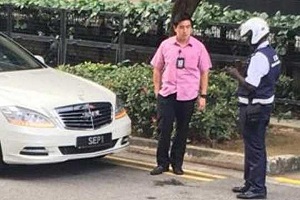 Officers who provide security protection to the President and other senior political leaders have been reminded to make sure their security convoys comply with traffic rules, without compromising the safety and security of the VIPs they are escorting. A joint statement to clarify this was issued to The Straits Times by the Land Transport Authority (LTA) and the police after an image was widely shared of a uniformed LTA officer apparently making sure that President Halimah Yacob’s vehicle complies with traffic rules.

The car in the image was part of the Police Security Command (SecCom) for the President, which led netizens to speculate if it had been ticketed for an infringement. No summons was issued, according to the statement, which also elaborated on the incident. It said an LTA enforcement officer was on a routine patrol in Prinsep Street when he saw two vehicles waiting at a stretch marked with double yellow lines. The offence of parking a vehicle where there are unbroken double yellow lines can draw a fine of at least $70.

The LTA officer approached one of the vehicles to ask the driver to move the vehicle, in line with LTA’s approach in enforcing this regulation, said the statement. The driver told the officer he was there to pick up the President. During the course of their conversation, she arrived and was ferried away without a summons being issued. SecCom provides security protection for the President and other senior political leaders.

The joint statement said: “As part of the security protection operations, the vehicle convoy is to be positioned close to the event location in compliance with traffic rules, to facilitate swift evacuation during contingencies. “In this case, the SecCom ground commander had made a decision for the convoy to wait there for the President as there were no street-side parking spaces available in the immediate vicinity which would have allowed the convoy to go quickly to the scene in the event of an emergency. “The police have reviewed this incident with LTA. SecCom officers have been reminded to park the convoy in compliance with traffic rules without compromising their mission to ensure the safety and security of those they are escorting.”