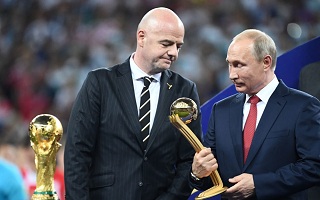 The president, whose comments were reported by the Kremlin, gave no information on the nature or possible origins of the cyber-attacks. “Behind this (World Cup) success lies huge preparatory, operational, analytical and information work, we operated at maximum capacity and concentration,” said Putin.

Russia, which hosted the World Cup from June 14 to July 15 in 11 cities and 12 stadiums, has been repeatedly accused by Western countries of conducting cyber-attacks.
Recently, 12 Russian military intelligence officers were charged with hacking Hillary Clinton’s 2016 presidential campaign and the Democratic Party in a stunning indictment. The charges were drawn up by Special Counsel Robert Mueller, the former FBI director who is looking into Russian interference in the November 2016 vote and whether any members of Trump’s campaign team colluded with Moscow