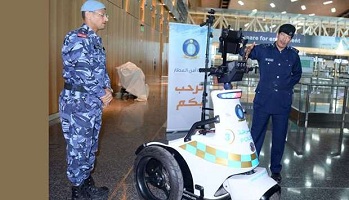 The Airport Security Department at the Ministry of Interior, in cooperation with Lakhwiya Force, recently launched a security robot at the Hamad International Airport. Built in the form of a scooter, the robot can measure pulse rate remotely and also has facial recognition feature. The robot carries cameras and sensors to detect suspicious and wanted persons, fake currencies, credit cards, abandoned objects and explosive of any kind.

Director of Airport Security Department, Brigadier Eissa Arrar al- Romaihi told mediapersons that the introduction of the robot would strengthen security services at the airport. “The device can identify suspicious passengers and stop them to conduct inspections , which make it easier for security personnel to secure the airport.” The robot can detect banned items carried by passengers that will be shown in different colours on its screens. These alerts will be sent to the operating room of the department at the airport.

Head of security technology at Lakhwiya, Major Ali Rashid, said: “The three-wheeled scooter robot is small in size allowing for free mobility across different parts of the airport. It has various devices that allow it to operate on its own.” A camera attached near the side wheel scans every passenger, displaying the person’s face, heartbeat, and identity on a screen fitted near its handle. It also includes telemetry to detect stress. A small sensor near its foot stand scans for any abandoned luggage and alerts the officials. It also hosts a currency scanner and fingerprint machine, in case the official handling the device requires them.

Major Rashid pointed out that the device would recognise suspects by measuring their heart rate. If it exceeds the normal limit, the device sends a signal to the security personnel who would stop the person and search him through the devices carried by the robot. He noted that a natural person has feelings and that come directly from the brain through certain signals that cannot be controlled. “For suspicious persons, there are signs such as high body temperature. From these data, we have developed an algorithm that identifies people who are nervous and need to be further scrutinised”.