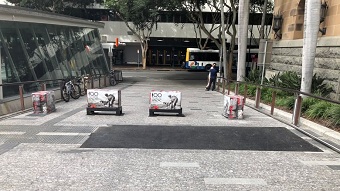 More than $2 million will be spent to install underground security bollards in Brisbane’s central business district. In the 2018-19 Brisbane City Council budget $2.8 million was listed under the project title “City Hall Precinct Maintenance and Enhancement”. Fairfax Media can reveal this money is to install security bollards in King George Square.

There have been large sections of tiles dug up in the square during night construction that has been occurring over several weeks. Large patches of bitumen mark where the works have been done and they are all close to the existing bollards. It is understood the new bollards will be retractable, similar to what was installed on the Esplanade at Surfers Paradise ahead of the 2018 Commonwealth Games.

The Gold Coast City Council spent about $1 million on the 16 retractable bollards.
Brisbane will spend more than $2 million to install its bollards. The council first installed security bollards in King George Square in December 2016. At the time, lord mayor Graham Quirk said the barriers would become a permanent feature as the council looked to replace the concrete blocks with “permanent structures around the King George Square and in some other parts of the city”.