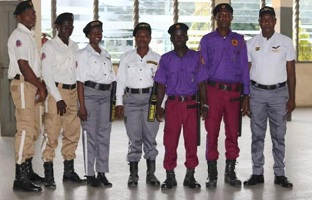 DSP Kwaku Anor Dompreh, Staff Officer, Private Security Operations Directorate of the Ghana Police Service, said that the 3-week certification training is aimed at “injecting professionalism” into the operations of private security companies in the country. List of persons who passed the training would be forwarded to the Ministry of Interior for clearance, DSP Anor Dompreh noted.

The Ministry of Interior would then issue the qualified personnel with identification cards, which would be used to seek employment in any private security firm of their choice. He warned that any private security company that employs persons who have not been certified by the ministry would invite sanctions.

Shadrach Mensah, who is on the Private Security Desk, at the Interior Ministry, entreated private security companies to crosscheck with the ministry when in doubt about the ID presented by any personnel. He also noted that list of qualified personnel as well as companies approved by the ministry would be available on its website for easy accessibility.

China is set to become the world’s largest aviation market by 2022, according to IATA research, and the country’s outbound travel market is also forecast to continue to grow. By 2030, the number of outbound trips made by Chinese travellers is expected to reach 400 million, and Chinese tourists alone will account for a quarter of international tourism says the Chinese Tourism Outbound Research Institute. To ensure adequate support for this growth, airports need to have security solutions that can detect concealed explosives or narcotics effectively, without disrupting passenger flow or experience at checkpoints.

The Ionscan 600 accurately detects and identifies a wide range of military, commercial and homemade explosives threats, as well as common illegal and controlled narcotics – all within eight seconds. The portable trace detector was approved for explosives trace detection as part of the passenger and baggage screening process within Chinese airports by the Civil Aviation Administration of China (CAAC) earlier this February. In addition, Ionscan 600 was awarded the Gold Award – Special Prize, at the China International Industry Fair in Shanghai in November 2017.

“Airports in China are expected to see a significant rise in passenger throughput and we are honoured to play a role in ensuring the safety of all travellers passing through our partner airports,” said Jerome de Chassey, Smiths Detection’s Vice President for the Asia Pacific Region. “The CAAC certification of our products is testament to Smiths Detection’s expertise in threat detection and our relentless drive to assure the safety of airports in China today through the delivery of high quality and reliable solutions. This certification is important to Smiths Detection as our organisation aims to grow market presence in Asia Pacific including China.”