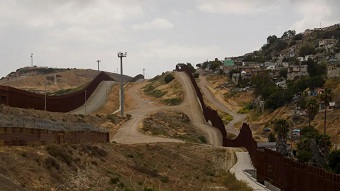 It turns out Mexico may actually pay for an expensive U.S. border wall after all, but certainly not in the way former president Donald Trump would have hoped. Following a wide-ranging meeting with the U.S. President Joe Biden this week, Mexican President Andres Manuel López Obrador agreed to spend some $1.5 billion over the next two years investing in so-called “smart” border technology.

The agreement amounts to both a departure from the contentious Trump-era political bickering between the two countries and a continuation of border surveillance efforts, which digital rights activists said could do more harm than good to vulnerable border communities
Though neither president provided concrete details on where the new funds would be allocated, previous smart border and smart wall pushes generally refer to a patchwork of facial recognition, drones, sensors, license plate readers, dog-like robots, DNA collection, and other emerging surveillance technologies that all strive to keep constant tabs on anyone entering or leaving the U.S.-Mexico border.

Though these so-called smart solutions seemingly offer an attractive alternative to sprawling physical barriers—particularly among Democratic lawmakers—they’ve simultaneously drawn intense scrutiny from academics and civil liberties groups who warn the technologies are ripe for abuse.

The two presidents did release a joint statement, however, where they said they were, “committed like never before to completing a multi-year joint U.S.-Mexico border infrastructure modernization effort for projects along the 2,000-mile border.”

The dream of smart, virtual border walls brimming with the latest new tech has ushered in a booming market filled with startups less averse to pursuing controversial defense contracts. Possibly the most famous, or notorious, of those eager startups is Anduril Industries, the brainchild of former Occulus founder and well-known shoe hater Palmer Luckey. During the last year of Trump’s presidency, Anduril received a five-year contract to deploy hundreds of its looming AI-powered surveillance towers scattered throughout the border.