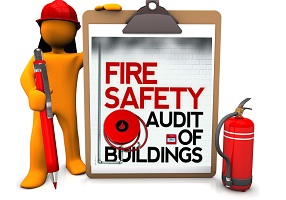 Twenty-five schools in Ireland to be audited for fire safety checks across the country will be randomly selected and include constructions by several developers, the Irish Independent has learned. Remedial work to address fire safety concerns at four primary schools in Dublin, Wicklow and Westmeath, are currently underway or are soon to begin and are expected to be completed by October. Audits of the schools, carried out in January and April 2016, found fire safety breaches including a failure to meet a required 60-minute fire resistance level, gaps around fire doors, no clear exit signs, missing smoke seals and escape routes not being protected.

A fifth school, Powerstown Educate Together in Tyrrelstown, Dublin, has been moved to another building, but works on the other four schools have started or are about to begin.
The Department of Education said it had been in “constant contact” with the schools and it confirmed that the 25 schools now to be investigated would be chosen randomly on the basis they’d been built in the past 20 years.

It was confirmed that it was therefore the case that schools will have been built by different developers, but the list would include Western Building Systems (WBS) – which built the currently affected schools. However, parents feel they are being kept in the dark about any potential risks associated with the fire safety issues. Principals are expected to be inundated with calls from concerned parents.
Despite the safety breaches found, the department has insisted the buildings present no danger to children and the necessary updates will take place swiftly.

A spokesman from Educate Together said the schools “welcomed” the publication of a tender notice on the Government’s e-tender site to commission fire safety audits for schools built under the Rapid Build Programme. But he added: “Despite numerous requests, the fire safety consultants’ reports have not been made available to Educate Together, or to the boards of management of the schools. The publication of these reports and greater transparency from the department on such matters is welcome.” The four schools were audited after Rush/Lusk Educate Together National School was found to have several fire safety concerns. Extensive remedial work was carried out on that school in 2014.