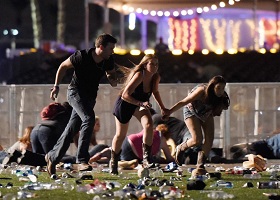 Less than two weeks before the Las Vegas mass shooting, law enforcement officials warned that “unaffiliated lone offenders” were one of the biggest threats to large gatherings in the southern U.S., according to a confidential report. Las Vegas was not cited as an area of focus by this report, which instead noted concerns around the South-Central region in states such as Texas and Oklahoma. Upcoming large public events in the southern U.S. listed in the report included marathons, festivals, fairs, Thanksgiving Day parades, the March Madness Final Four, and the South by Southwest festival.

The 11-page Homeland Security report, dated Sept. 20, said while there was no specific or credible threat cited, “we assess that unaffiliated lone offenders, homegrown violent extremists, and domestic terrorists pose the most significant near-term threat to special events and mass gatherings in the United States, likely by conducting small-scale simple attacks that do not require significant planning or expertise but could still be potentially fatal and result in numerous casualties.”

The report said homegrown extremists and lone offenders “are of particular concern due to their ability to remain undetected until operational, their willingness to attack civilians, soft targets and hard targets, and their ability to inflict significant casualties that do not require specialized knowledge, access or training.” While there was no threat to mass gatherings cited, the report said, “we remain concerned about the sustained interest of international terrorists and violent domestic extremists in targeting these events.”

For years, law enforcement officials around the country have been concerned about so-called lone-wolf attacks in high-target areas. The unclassified document — called a “field analysis report” — was prepared to assess potential terrorist threats to mass gatherings and special events in the South-Central region of the U.S. including Arkansas, Oklahoma, Louisiana, Mississippi and Texas.