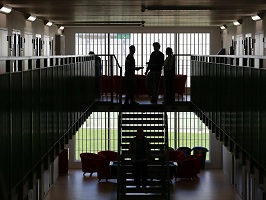 Fire safety in prisons has been labelled “a catastrophe waiting to happen” after it was revealed every prison inspection in England and Wales in 2016 resulted in a non-compliance order. In the wake of the Grenfell Tower fire, which claimed at least 80 lives, Mark Leech, the editor of the Prisons Handbook, carried out Freedom of Information (FOI) requests asking for the fire safety inspection reports of prisons last year.

All of the 19 inspections resulted in a red-flag, known as a non-compliance notice, and in some cases Statutory Enforcement Notices were then then given to prison governors who failed to take action within 28 days. There were 2,580 fires in prisons in England and Wales in 2016 – almost 50 a week – according to a Parliamentary written answer given in March this year.

None of the documents — the non-compliance notices, the 28-day warning letters or the Statutory Enforcement Notices — had previously been made public, Mr Leech claimed.
Mr Leech told The Independent the results of the investigation were “truly shocking”, not only for the UK’s 85,000 prisoners and 28,000 prison staff, but for the hundreds of thousands of people who visit prisons each year who could be caught up in a fire.
Mr Leech, who published his findings on prisons.org.uk, said he decided to investigate because “Grenfell changed everything.”

He said: “I actually hadn’t thought much about fire safety in prisons until Grenfell, even though I have been involved in prison campaigns for years. “When I got the results and every single [inspection] was a failure, it was a real shock, even to a campaigner like me who is used to failings in the system. It’s a catalogue of decay and collapse and of course, we urge the Government to take action urgently.”