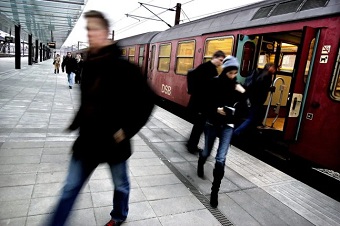 DSB, the Danish state-owned railway company, has added guards at 29 stations in Copenhagen — primarily on lines Copenhagen H to Køge and Copenhagen H to Høje Taastrup. The move is part of a 24 million-kroner-per-year package to improve security by DSB, which also includes the deployment of 700 new cameras at 46 stations.

The DSB package is part of a plan passed in parliament in November last year which involves 12 different initiatives aimed at increasing security in public spaces. DSB has also announced plans to increase staffing in its video surveillance department with two full-time employees.

“We know from customer measurements that safety at stations means very much to our customers,” Lars Gøtke, vice director with DSB property subsidiary DSB Ejendomme, told news wire Ritzau. An additional 13 stations have the option of receiving security guard patrols when the need arises, for example at night. “We have been able to see which stations are the most vulnerable. These are where the guards will make their rounds on various routes,” Gøtke said.

DSB does not have data relating to antisocial behaviour at its stations, however, according to news wire Ritzau. The rail company is to make ongoing evaluations of the effectiveness of the programme. “The guard scheme is something we intend to continue with going forward. If there proves to be a need to scale up or down on the number of guards and stations, then we will look at how things develop,” Gøtke said.