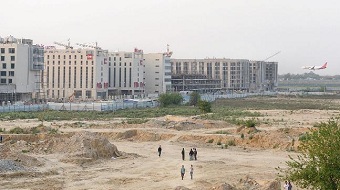 These buildings are mainly being constructed in Dwarka and Vasant Kunj. At the same time, the court also asked the civic agencies of Delhi, Gurugram and Noida to ensure that no new sale of properties near airport takes place till further orders. The court was hearing a plea by lawyer Yashwanth Shenoy, who said that Aerocity which has several high-rise hotels near the international airport was a major threat to security and safety of aircraft flying over it.

It had earlier been reported how only 40 obstacles of 369 were removed by the airport authorities. During the hearing, the court was also told that although it is mandated for the authority to carry obstacle survey every two years, but the DGCA had also examined the obstacles just twice since 2007.

According to the aviation experts, the guidelines say that there should be no high-rise buildings within approach funnel of any airport in order to provide a safe glide path to aircraft. Depending upon the aircraft and the airport the distance on approach path varies and so the height restriction becomes a critical issue. So, there is a lot of scope for manipulation in the calculation of permissible height by the authorities. The DGCA told court that it was in the process of removing the obstacles. The court asked the Directorate General of Civil Aviation to issue public notices to the residents of the high-rise buildings around the Delhi airport citing safety concerns about the building being in the path of flights taking off and landing