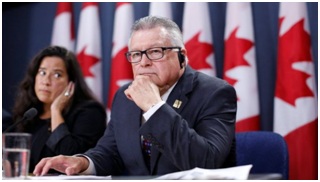 Canada has introduced extensive security legislation that includes the creation of a “super” national security review body. The Liberals say its proposed overhaul of national security laws will shed light and oversight on the activities of the country’s spy agencies. It says the changes will balance both rights and security. Critics say that does not go far enough in keeping people safe or protecting the privacy of Canadians. The national security overhaul dates back to a 2015 general election promise by the Liberals.

The party committed to repealing what they called “problematic elements” of controversial sweeping anti-terrorism legislation passed by the former Conservative government.
The Conservative bill, which increased government policing, information-sharing and surveillance powers, was passed a few months after a gunman killed a Canadian soldier and stormed Parliament Hill in Ottawa before being shot and killed himself. Many people expressed concern that those new measures could violate Canada’s rights charter.
Mr Goodale called the new national security review body a “major innovation in our security architecture”.

The National Security and Intelligence Review Agency will keep an eye on security and intelligence activities in Canada. The arms-length oversight body will review every department and agency within government that has a national security function.
The Liberal Bill C-59 will also create another new watchdog role. An intelligence commissioner will be tasked with authorising certain intelligence and cyber-security activities of the Canadian Security Intelligence Service (CSIS) and the Communications Security Establishment (CSE) to ensure they are in line with Canadian laws. OpenMedia, an internet advocacy group, says that while some of the proposed measures in C-59 are a step forward, the bill does not far enough in protecting the privacy of Canadians from information sharing and gathering by security and police agencies. Conservative public safety critic Tony Clement said on Twitter the proposed bill “weakens ability of our security agencies to respond to terror threats”.