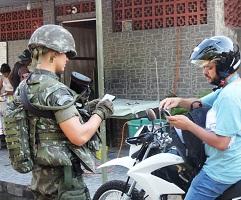 Brazil’s lower house of congress overwhelmingly backed the military’s takeover of public security in Rio de Janeiro, the Senate gave the measure final approval , voting 55 to 13 in favor. “Together, the police and the armed forces will combat and confront those who have kidnapped our cities,” President Michel Temer said when he signed the decree deploying the military to Rio. “I know it’s an extreme measure but many times Brazil requires extreme measures to put things in order.”

Gangs have “virtually taken over” Rio’s metropolitan area, home to 12 million of the state’s 17 million people, Temer said. The state’s governor will retain control of the government, but the military will report to an army general who will report to Temer, which will ensure civilian oversight of the armed forces, the president has stressed. It is the first military intervention since Brazil’s military dictatorship fell in 1985.

Rio de Janeiro has been plagued by worsening violence for several years, and Temer’s decree came just a few days after the end of Rio’s famed Carnival celebration, which was marked by violence and displays critiquing the government’s response to it. Television networks showed footage of shootouts between gangs and of young men attacking tourists in areas usually considered safe, including Ipanema beach. Three military police officers were killed. The state governor admitted that his administration was not prepared to provide security and said authorities confiscated an ” incredible ” number of firearms.

The state government initially said crime went down during this year’s festivities, but data obtained by Rio newspaper O Dia indicated that even as homicides declined, robberies and car thefts increased. 2018 has gotten off to a violent start for Rio. There were 688 shootings in the state in January – many in the sprawling, often poor and marginalized neighborhoods known as favelas, where authorities have little presence.