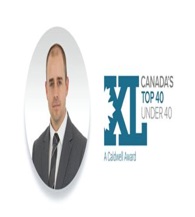 Avigilon’s President and Chief Operating Officer, has been selected as a recipient of Canada’s Top 40 Under 40 Award for 2018. Considered the country’s most coveted award for young business leaders, Canada’s Top 40 Under 40 annually recognises the exceptional achievements of 40 outstanding Canadian leaders and innovators under the age of 40 who are making significant impacts on their organizations and in their communities.

James was selected from over 800 nominees by an independent, cross-national Advisory Board, based on four key criteria: Vision & Innovation; Leadership; Impact & Influence; and Social Responsibility. Since joining Avigilon in 2011, James has been instrumental in the company’s rapid growth and continued success. Under his leadership, Avigilon has expanded its market presence, brand awareness, and corporate profile, to become a globally recognised leader in the security industry. He provides the strategic vision that has successfully driven Avigilon’s topline revenue growth and profitability. Recently, he led the sale process resulting in the $1 Billion acquisition of Avigilon by Motorola Solutions—one of only three acquisitions of its size in Canada in the last decade. With his tremendous drive and focus on innovation, James is a recognized leader in the security industry.

“This award is a testament to the hard work of the over 1,200 Avigilon employees in Canada and around the world,” said James Henderson, Avigilon’s President and Chief Operating Officer. “I’m honoured to receive it and am excited about our company’s future as we continue developing advanced artificial intelligence technologies to help solve today’s biggest security challenges.”

The 2018 Top 40 recipients were announced on BNN Bloomberg and in the National Post. Recipients will attend the Top 40 National Celebrations to be held in Toronto in November, and will be honoured at the Top 40 Awards Night Gala at the Metro Toronto Convention Centre on November 21, 2018.