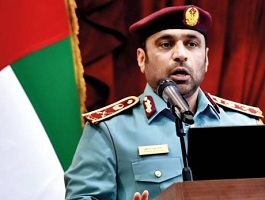 All vital buildings in the UAE will be directly linked to a smart fire safety system of the Civil Defence where fire warnings will be sent automatically to operations room, a top official says. The announcement was made during a formal launch of the UAE’s new fire safety code that was first adopted in 2011. Officials also clarified: “This is not a new code, but an update of the existing fire safety code. The current code was established in 2011.” Speaking on the sidelines, Major General Jassem Al Marzouqi, Commander-in-Chief of Civil Defence, Ministry of Interior, said, “Within three years, we will be connecting all vital and important buildings with the new smart system.”

In case of fire, alarm signals will be immediately sent to the Civil Defence operations rooms.
“Nobody would need to report the fire in a building,” he said adding, “all buildings and homes across the UAE will be equipped with the new smart system of fire prevention mechanism.” “Already we have signed an agreement with Injazat and now we are implementing it. Now they are preparing the operation rooms and within six months they will do that.” Al Marzouqi said: “In Dubai, all buildings are connected with the smart system but here in Abu Dhabi and other emirates we will gradually roll out the plan.”

“We don’t have any issue with new buildings, they follow all rules. But existing old buildings we review them first. If some safety features are missing we ask them to follow the rules,” he said. The new codes will further enhance the firefighting system and help minimise the spread of fire, loss of lives and damage to properties, he said. “In last five years things have changed. Now we have new challenges, new technology, new kinds of training, tactics of firefighting and new system of fire preventions. So all these considerations were taken into account to update our code and make it more sophisticated in protecting our society and lives and properties.”