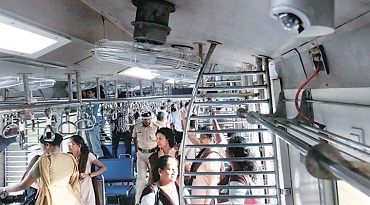 The first CCTV camera system was installed inside a Mumbai local train recently by senior Western Railway (WR) officials and Central Railway (CR) General Manager, Sunil Kumar Sood. The train operated between Churchgate and Bandra. The electronic surveillance system is initially being installed in the women’s coaches in three EMU rakes. Each women’s compartment will have nearly four to eight cameras. According to officials, WR had been testing the system for almost six months and have finally declared it fit to be deployed.

The system stores data in a digital video recorder which has the capacity to record for 30 days. The data will be used by the police to ensure the safety of women commuters. “It will hopefully deter criminals and reduce crime rates in trains,” said Sharat Chandrayan, chief WR spokesperson. The cameras have a resolution of three megapixels with wide angles to cover all corners of the compartment. “They have been installed so as to ensure that the entry and exit of the compartment are covered completely,” said a WR official. “The cameras have been customised as per requirements and will work on traction technology which can withstand shock and vibrations as trains on the suburban section often clock 80-100 kmph,” said a WR statement. The WR plans to install CCTV cameras in all three women’s compartment rakes on WR by July for a trial period of three to six months. “By the end of the year, we will review how effective the system is and what changes need to be made and installed on the Central and Harbour lines,” said Chandrayan.