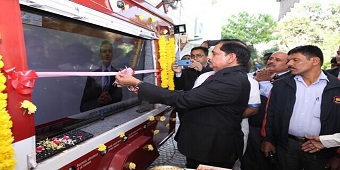 Stating that it was a first-of-its-kind facility in the country to provide training on site, Mr. Reddy described it as a “transformational leap” and said it would be at the disposal of HMRL to organise periodical security training. About 900 security personnel are working in the metro rail stations stations in three shifts and a noted private security agency is providing the security personnel.

Training would be conducted through audio-video films and PowerPoint presentations, posters, boards, handbooks etc., and would be monitored through the National Command Centre. The system is GPRS-enabled through latest technology for tracking location and running time of each subject, he explained.

The MD appreciated the good work being done by the police personnel and the private security guards working at the metro stations. Specifically, he mentioned about detecting and catching some passengers carrying camouflaged knives in leather pouches, highly inflammable liquids, banned drugs etc., through careful frisking and proper usage of metal detectors at different stations. DCP of HMRL, A. Balakrishna, was advised to periodically give publicity cautioning about carrying dangerous implements so that the passengers understand the importance of security checks. At the same time, he called upon the security personnel to be courteous to passengers and practice friendly policing practices at metro stations.