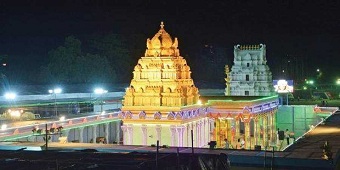 The temple city, Tirupati, was rated as the second safest city in the country on three parameters — the best surveillance, low crime rate and better enforcement — by the Ministry of Housing and Urban Affairs based on its ‘Ease of Living Index’ 2018 survey. The ministry assessed 111 cities in the country on safety and security parameters. However, Tirupati stands fourth in overall rankings.

The ministry conducted a detailed survey on ‘Safety and Security’ by studying various indicators such as the number of CCTV cameras installed in the city per unit of road length, the number of recorded crimes per lakh population and the extent of crime recorded against women, children and elderly per year. According to the report, Sagar of Madhya Pradesh topped the country with the safest city rank, followed by Tirupati.

The other cities shared top five ranks after Sagar and Tirupati are Puducherry, Karimnagar and Imphal respectively. Keeping in view Tirupati’s importance as the world’s major pilgrim centre and regular rush of devotees and VIPs for darshan of Lord Venkateswara, to create a safe environment city urban police has concentrated on putting in place top security and surveillance mechanism. As part of surveillance, about 622 CCTV cameras have been installed by the department around the city apart from integrating as many as 10,000 CCTV cameras installed at various shops and colonies.