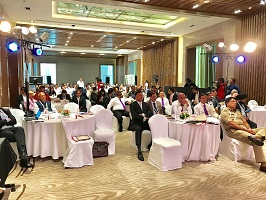 SECURITY TODAY KNOWLEDGE SUMMIT 2018 left the Capital to enthrall the ‘Garden City’ of Bengaluru for its latest edition on August 30, 2018. The result was a thundering success with over 225 security professionals thronging the Ballroom at ITC WelcomHotel Bengaluru and actively participating in the day-long proceedings. Such was the enthusiasm of the security professionals over STKS 2018 coming to their city, that SECURITY TODAY had to regretfully stop registration of entrants to enable the day-long summit to proceed on comfortable lines and as per the maximum capacity of the massive Ballroom.

The event that constituted 11 interactive sessions comprising of multiple topics, included “Information Sharing Mechanism Between the Government and the Private Sector”; Personal Data Protection Bill and its Impact on Physical Security Vendors; How to Become a Proactive Security Organisation; Predictive Criminal Profiling amongst other topics. Each session witnessed interactive involvement of professionals, often resulting in sessions going into extra time. Notably, the hall stayed packed through the entire day contrary to the standard practice of events finding low attendance towards the end of the day.

What was significant about the Summit was that most participants commented and agreed that they had gleaned security knowledge and education without it being obvious since the process was done in a manner that looked like a healthy discussion between security professionals.

Committed senior security practitioners flew in from all over India and abroad to attend the Summit that has now been widely established as a premier event for the private security industry in the India Region. In fact, even Mr. Bhaskar Rao, IPS, the Additional Director General of Karnataka Police, who spent the entire day at the event, said that such events bridge the gap between law enforcement and the private security industry.

In the early feedback being received from participants, Col. Sanjeev Mishra, CPP, the Sr. Vice President of Reliance Industries and Chapter Chair of the ASIS Mumb at Chapter stated, “I listened to several thought leaders delivering Keynote Speeches on futuristic topics. I am taking away some great ideas and insights. I also availed of this opportunity to catch up with some dear friends and made some new ones during the ‘Knowledge Extravaganza.’ A brilliant show by the SECURITY TODAY Team!”

“It was a fantastic show and the venue turned out to be great!! Bengaluru has such awesome security professionals, it was a great decision to bring the show to this city”, commented Mr. Amit Sharma, CPP, the Senior Vice President & Regional Security Manager, at Bank of America.