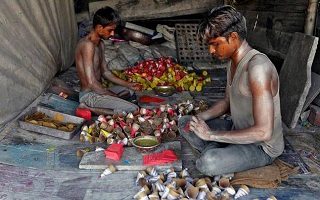 Security audit of firecracker factories in Nalanda and Patna districts would be done soon and action taken against violation of the rules and norms. This was stated by Patna division commissioner Anand Kishore after he inspected the site of explosion in an illegal firecracker factory in Khasganj locality at Biharsharif on March 22. Six people, including factory owner Sarfaraz Khan, died and 20 others sustained injuries in the explosion.

Kishore and Patna range DIG Rajesh Kumar also spoke with local residents to know the series of events during and after the explosion in Sarfaraz’s tenanted accommodation.

Nalanda DM Thiyagarajan S M and SP Sudhir Kumar Porika have been asked to assess the extent of damage caused to the adjacent buildings due to the blast and recommend compensation. They were also asked to organize a medical camp at Khasganj to ascertain whether the high-intensity explosion caused any adverse impact on people’s eardrums.
According to Kishore, the Nalanda district administration has identified seven illegally operated manufacturing and sales units of firecrackers in the district and the process for action against them has been initiated.