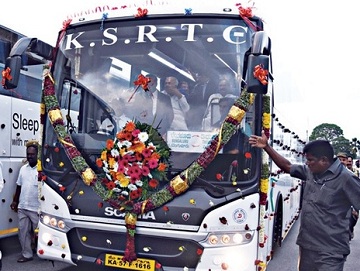 With the aim of minimising fire accidents and enhancing safety of passengers, the Karnataka State Road Transport Corporation (KSRTC) sought advanced fire detection and prevention measures in the newly launched ‘Diamond Class’ buses produced by Swedish commercial vehicle maker Scania. The new range of inter-city buses have been manufactured by Scania at their plant in Narsapura near Kolar, primarily for the Indian market.

Currently, the plant has a capacity to produce 2,500 trucks and 1,000 buses annually. Scania will be delivering 35 buses to KSRTC. Anders Grundstrmer, Managing Director, Scania India, said these advanced features will be present in its KSRTC’s Diamond Class buses. “The fire prevention feature will have water sprinklers under the bus near the fuel tanks,” he said. The other safety features in the Scania buses include the placement of the fuel tank and batteries between the axles of the bus, Grundstrmer said. Explaining about other safety features, he said there is an emergency door, safety belts for each passenger, more number of hammers in each bus to break glass in case of emergency and even roll-over protection.

Pointing out that it is usually the luggage and fuel tank that are most likely to catch fire, he said fire-retardant material have been used for the interiors of the buses.
He said that the structure of the bus has been strengthened to protect passengers in case the bus rolls over. Safety videos on the benefits of using seat belts and emergency as well as safety information brochures will be in each seat. Onboard computer systems limit the speed of the bus to 85 kmph as per Karnataka’s regulations. The computer will also monitor driving information to further improve fuel efficiency and provide assistance in driver training, he said.

The company has around 100 buses plying in various parts of the country, which includes both private and public transport.  The company is also looking at Bio-ethanol-driven buses for the Indian and export markets. Grundstrmer said they are looking to convert agri and wet waste and sewage into bio-ethanol and biogas to power its buses.