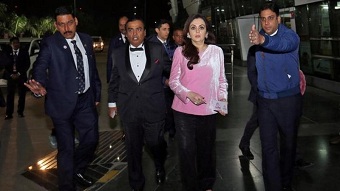 The Supreme Court has directed the Centre to continue providing security to industrialist Mukesh Ambani and his family and closed proceedings in a public interest litigation (PIL) pending against them before the Tripura high court.

The top court, which had on June 29 stayed orders passed by the high court seeking details of the threat perception and security assessment, felt that PIL petitioner Bikash Saha had no locus to question the security provided to Ambanis, who reside in Mumbai and pay for the security cover.

The Centre had approached the top court on June 27 appealing against the May 31 and June 21 orders of the high court entertaining Saha’s petition and directing the Centre to produce the threat assessment for the Ambanis in a sealed cover. The Centre told the apex court that a similar petition filed in Bombay high court was dismissed earlier and there was no reason for the PIL to be instituted in Tripura as the Ambanis do not reside there.

On Friday, the bench asked the petitioner about his locus and said, “The government is there. They will take care of the security. Why are you bothered.” It went on to direct, “It is up to the Centre to continue the security. Considering the ground realities and threat perception, let the security continue to be provided by the Centre. We see no reason for the proceedings in this case to continue before the Tripura HC.” The court set aside the HC proceedings and disposed of the Centre’s appeal.

Appearing for the Ambanis, senior advocate Harish Salve said during the hearing that it was unfortunate that a PIL should be filed on such an issue and worse that courts start entertaining it. “Government sends the bill for security and the same is fully paid by the respondents (Ambanis). If the government feels that they deserve security, it is to be given. It is unfortunate that this kind of slur is created (by the petitioner) and when courts start to entertain these petitions, it is even bad.”

Salve recalled the recent threat faced by Ambanis after an explosives-laden vehicle was found parked outside their Mumbai residence in February last year with a note warning of future threats. Appearing through video-conferencing from London, Salve said, “We know what the situation is today. Of the family members, one is the chairman of the biggest digital company in India today. They employ 4-5 million people.”

On December 11, 2019, the Bombay high court had dismissed a similar PIL, filed by one Himanshu Agarwal, that questioned the state expenditure on providing security cover to the Ambanis and prayed for its withdrawal. Against this order, Aggarwal also approached the apex court, which refused to entertain his appeal. The top court, in its order passed on October 27, 2020, said, “It is for the state to assess and review the threat perception of an individual on a case-to-case basis.”