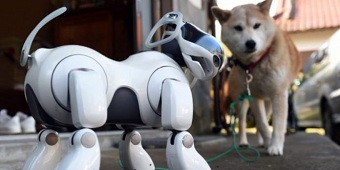 Soon airports in India will have robotics canines/dogs with advanced features such X-Ray vision eyes to scan the luggage of passengers. The Central Industrial Security Force (CISF) is reportedly planning to deploy robotic canines at airports across the country in an effort to boost security. CISF is the paramilitary force which works for seaways, airways and some of the major installations in India including airports.

These robotic canines a.k.a dogs will replace airport security dogs such as the German shepherds, Labradors or Belgian Malinois, which are used by the CISF in airport security.
The use of “robotic canines” came up in discussions at the Global Aviation Security Symposium 2018 held at Montreal, Canada, attended by CISF DG Rajesh Ranjan and additional DG M A Ganapathy, also in-charge of aviation security at airports across India.
With deployment of robotic canines, CISF aims to use the latest technologies to deal with increasing global threats to aviation, greater volumes of air travellers and new tactics used to smuggle illegal items through airports.

According to an official statement, CISF has a tie-up with Transport Security Administration (TSA) of the United States and also has a capacity building pact with the EU as well, which will help CISF explore a lot about new technologies and methods of securing airports across India.

Additionally, use of CT scan-based screening of hand-luggage and cabin baggage ws also discussed along with the use emerging technologies like Artificial Intelligence (AI), latest explosive detectors and biometric control access at the airports. To recall, in May this year airline Vistara has launched India’s first robot at Airport named ‘RADA that uses AI technology and can assist customers, address their queries and even entertain them.