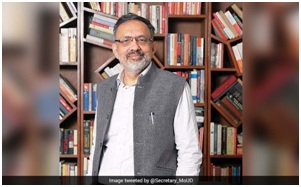 Urban Development Secretary Rajiv Gauba was today named as the next Home Secretary as part of a major top-level bureaucratic reshuffle effected. He will succeed Rajiv Mehrishi, who completes his term on August 30. A total of 16 secretaries have been appointed to various central government departments. The government has changed portfolios of a few secretaries in this rejig. Mr Gauba, a 1982 batch IAS officer of Jharkhand cadre, will take over as Officer on Special Duty (OSD) in the Union home ministry with immediate effect, an order issued by the Department of Personnel and Training (DoPT) said.

He has served in the home ministry as joint and additional secretary where he looked after crucial Naxal division, among other responsibilities. Durga Shanker Mishra will replace Mr Gauba as the Urban Development Secretary. He is the Additional Secretary in the same ministry