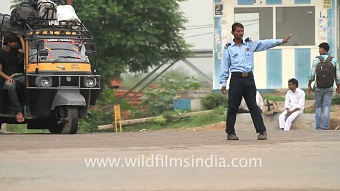 In order to prevent frequent road accidents on the Delhi-Gurugram expressway, the Millennium City Expressway Private Limited (MCEPL) has decided to deploy two security guards each at the entry and exit points of the National Highway. The private security guards will be deployed with an aim to stop vehicles changing service lanes on National Highway. Most of the accidents are caused by pedestrians and sudden entry by vehicles from the service lanes to NH-48. The carriageway has 18 entry and 19 exit points. With no traffic regulation in place, this corridor has become a free-for-all for all types of traffic including two and three-wheelers.

These vehicles have been banned on the stretch since it is a high-speed zone and they don’t pay the toll. Though traffic signages have also been put at most of the entry points barring the entry of such vehicles, the rule is openly flouted in Gurugram. “We will deploy traffic marshals at all entry and exit points to check the entry of two-wheelers and three-wheelers on the main carriageway. We will seek help from the Traffic Police to stop these offenders because the marshals do not have the authority to stop these commuters,” S Raghuraman, Chief Executive Officer (CEO) Millennium City Expressway Private Limited (MCEPL), said.

He said that a joint drive will be conducted with the authorities concerned. “We have repeatedly sought the help of the authorities to step in on a regular basis so that this problem can be effectively tackled,” the CEO said. On the other hand, the Delhi-Gurugram Expressway in Gurugram continues to claim lives despite claims by the police that they have identified the 15 most accident-prone spots on the expressway and have deployed personnel there to regulate traffic.

Data released by the traffic police in 2016 revealed that the NH-48 in Gurugram has claimed 420 lives. The death toll reached 1, 032 in 2017. The national highway has claimed 287 in the first four months of 2018. The Gurugram police, a couple of months ago, had conducted a series of drives to catch violators. The drive was quite successful. “We will conduct these drives on regular basis to tame the violators,” said, Assistant Commissioner of Police (Traffic), Heera Singh.