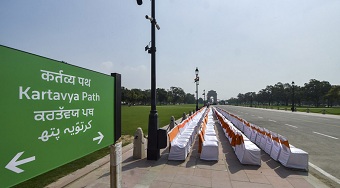 With the inauguration of Kartavya Path from Rashtrapati Bhawan to India Gate, more than 80 private security guards will keep an eye on the entire stretch, besides police personnel, to prevent incidents of theft and damage to the newly-installed facilities, officials have said.

According to an official, there will be heavy deployment of police personnel and security guards for at least two months. However, no major restrictions for visitors will be in place.
The Central Public Works Department (CPWD), an executive agency of the project, has divided the entire corridor into five stretches – India Gate, C Hexagon to Man Singh Road, Man Singh Road to Janpath, Japath to Rafi Marg and Rafi Marg to Vijay Chowk. According to the plan, food items will not be allowed in the garden area from India Gate to Man Singh Road.

The official said maintaining cleanliness will be a challenge as after the inauguration, people in large numbers will throng the stretch, which is considered to be the most popular public space in the national capital.

“More than 80 security guards will be deployed on the entire stretch. We have also requested the Delhi Police to deploy its personnel. The purpose behind the deployment of security personnel is to ensure that there is no theft and damage to the newly-installed facilities,” the official said.

Talking about the facilities, another official said there are two blocks near India Gate and each block has eight shops. Ice-cream carts will only be allowed in the vending zones, he said, adding that although no decision has been taken yet, it will be ensured that the ice-cream trolleys are not allowed along the roads.

Parking space for 1,125 vehicles has been created on the entire stretch. A parking space for 35 buses has also been created near India Gate. The redevelopment project of the Central Vista — the nation’s power corridor — envisages a new triangular Parliament building, a common central secretariat, revamping the three-km Rajpath, a new prime minister’s residence and office, and a new vice-president’s enclave.