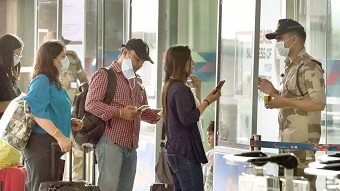 Private security guards have replaced CISF personnel in ‘non-core security positions’ inside the Guwahati Airport within a year from the takeover of the northeast’s largest airport by the Adani Group.

The airport management said private security guards have been deployed in the areas where there is hardly any chance of attack by outsiders. Initially, around 45 private security personnel were deployed at the international airport that was earlier entirely guarded by around 400 CISF personnel.
“In those non-core security positions, where there is no possibility of a direct attack, private agencies have been roped in. Non-core positions are only to protect the procedure, like the movement of passengers after entering the airport following security check by CISF on the main entry point,” clarified Utpal Baruah, chief airport officer of Lokpriya Gopinath Bordoloi International (LGBI) Airport, when contacted.

He informed that the private guards are being deployed mainly in and around the areas where the boarding tickets are issued. “The first door is a very important security point and will always be under the CISF. The gate to the security passage will also be manned by CISF,” he said.

Baruah said private security personnel have been engaged at the airport following clearance from the Bureau of Civil Aviation Security. “The youths have been properly trained by CISF to meet the standards. Their duty was so far being delivered by CISF,” Baruah added.

Though the previous number of CISF personnel engaged at the airport are still in the service of the airport, Baruah said slowly their number will be reduced. Airport officials said security checks at the airport have always been sensitive in the wake of numerous incidents of gold smuggling in the rectum, seizure of foreign currency and narcotics in the past. The Guwahati Airport recently recorded a daily footfall of around 15,000, a significant rise after the passenger number dropped noticeably in the peak of the previous waves of Covid.

The LGBI Airport was handed over to the Adani Group last year for operations, management and development responsibilities. The Union government in 2018, included the Guwahati Airport in the group of six airports along with Ahmedabad, Mangaluru, Lucknow, Jaipur and Thiruvananthapuram for privatisation on the OMD model for a period of 50 years.