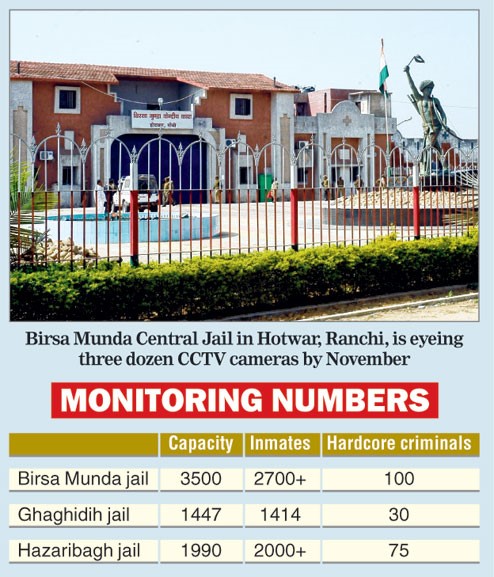 Surveillance in porous central prisons may improve by this year-end. Jharkhand Agency for Promotion of Information Technology (JAPIT), the nodal outfit for electronic networking in the state, is learnt to have floated online tenders to seek a suitable firm to supply, commission and maintain a hi-tech vigilance system at Birsa Munda Central Jail in Hotwar, Ranchi. The September 30 tender notice mentions that the agency will be chosen by November, although the final date of opening the bid hasn’t been announced yet. This fresh step to install a new cluster of closed-circuit television cameras will also be extended to the state’s two remaining high-security prisons — Ghaghidih Central Jail in East Singhbhum and Loknayak Jaiprakash Narayan Central Jail in Hazaribagh.

Birsa jail superintendent Ashok Kumar Choudhary has confirmed the development and said they had already shelled out Rs 58 lakh for implementation of the project. According to another jail official, requisition has been made for around three dozen cameras.