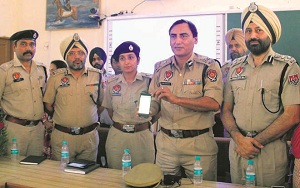 Amid a hue and cry over the security of girls, the Punjab Police have launched a WhatsApp group, Friends Cop, for Patiala district residents. The motive is to reach out to the person in case of an emergency. ADGP (Law and Order) Rohit Chaudhary launched the group at the Government College for Girls. He also held an interactive session with girl students of various institutes.

ADGP Chaudhary said, “Besides the principal of the educational institutes, we will add five girl students in the group and their issues will be solved immediately after receiving the complaints. Top police officials of the district concerned will also be added in the group for the assistance of the girls.”

“It is an initiative under the community policing which will make young girls feel safe. Besides security issues, girls could ask any question related to the services being provided by the Police Department,” the ADGP said.

Chaudhary said, “Special security arrangements are being made by the Punjab Police for the security of women. A special reception room is being provided and a woman receptionist will be deployed there for the ease of women complainants. The logbook of the police station will also be maintained by the staff for proper redressal of complaints which will be looked into by senior police officials of the district police,” Chaudhary said.

While talking about the security of Patiala city, ADGP Rohit Chaudhary said to tackle the problem of crime in the city, the Police Department would establish a modern control room under the pilot project.

“We will provide Rs 1 crore for the purchase of patrolling vehicles. We will soon start electronic challan system which would ensure smooth control of traffic in the city,” Chaudhary said. Patiala IG AS Rai, DIG Sukhchain Singh Gill, SSP S Bhupathi and Chiranjiv Kaur, Principal Government College for Girls, were present on the occasion.