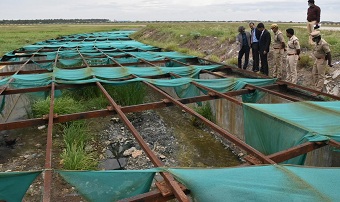 A wide range of issues concerning the operation of the Coimbatore International Airport were discussed at the Airfield Environment Management Committee (AEMC) and Aerodrome Committee meetings held recently.

Coimbatore District Collector G.S. Sameeran suggested the airport administration install surveillance cameras covering the entire perimeter of the airport compound. Airport Director S. Senthil told the committee that surveillance cameras have been installed at key locations on the perimeter wall. There are watch towers manned by armed personnel of the Central Industrial Security Force (CISF) in every one km.

In addition, the CISF personnel patrols through the perimeter road inside the compound. The Collector’s suggestion would be conveyed to the Airport Authority of India. Mr. Sameeran, Mr. Valavan and Coimbatore Corporation Commissioner M. Prathap inspected the stream passing through the compound of the airport. The stream, now mixed with sewage, runs from the side of Avinashi Road and crosses the airport compound on its course to Irugur.

The airport administration had made a structure to prevent the garbage being carried by the stream from entering the airport compound. Inside its compound, the airport authority had covered the stream with green net to reduce bird activity. “Coimbatore Corporation has extended support to resolve the issue,” said Mr. Valavan. Corporation’s East Zone chairperson Ilakkumi Ilanchelvi Karthik had brought the issue of sewage stagnation in the fourth general meeting of the civic body.

She alleged that the airport authority erected a wall blocking the stream and sewage stagnation was causing various problems including mosquito breeding. Corporation officials said that the stagnation would be removed using suitable machinery as employing people may pose risk to them because of the possible presence of toxic gas. The airport authority informed the committee that various measures were being taken to control bird activity inside the compound.

Apart from zon guns installed at various places, bird chasers have also been employed. The highest bird activity in the compound was of the lapwing. Black-naped hare that enter the compound to forage grass were also being removed with the help of the Forest Department once in a month.