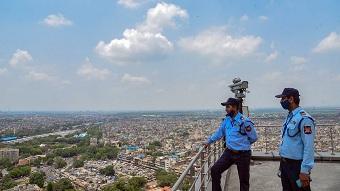 In November last year, a massive blaze engulfed the Ahmednagar civil hospital in which 11 Covid-19 patients died and seven others were injured. After the dust settled, the Maharashtra state labour department learnt that five security guards risked their lives to help save as many patients as possible from the Covid-19 ward, and even helped douse the fire.

The incident, it is learnt, has prompted the Maha Vikas Aghadi (MVA) government in Maharashtra to take note of the state’s security guards — the public’s first points of contact in any establishment, whether government or private.

The state labour department has launched a scheme to identify all such security guards who go beyond their call of duty to help people in extraordinary ways, and give them awards, an official in the department told ThePrint.

“We realised that the Ahmednagar fire was not the only incident where security guards acted as first responders and saved people,” the official said. “During the three waves of the Covid-19 pandemic, security guards at various places did a lot of good work. They are usually unsung heroes and need to be appreciated.”

The state government, the official added, has decided to identify all such security guards and reward them with a certificate and a government medal every year on 1 May, celebrated as Labour Day. Security guards in the state operate under the Maharashtra Private Security Guards Act, 1981, and are deployed to various government and private organisations as needed. There are a total of 38,000 registered security guards who loosely operate under various ‘mandals’ at district levels.

The state government has asked these mandals to nominate guards for the state’s awards by the end of February every year. The government is said to have identified six broad services based on which the mandals can nominate security guards for awards.
These are, saving someone’s life, making maximum effort to stop any criminal activity, helping out during natural disasters, helping victims of accidents such as a fire, vehicle accident or any other grievous accident, taking steps to avoid any loss to the establishment the security guard is working for, and being distinguished in any state-, national-, or international-level sport.

The state labour department has formed a seven-member committee headed by the state labour commissioner to scrutinise the nominations by 15 March every year and make a final list of awards by 15 April. The panel, the source said, has been told to make sure that a single district does not get more than three awards unless the circumstances are exceptional.