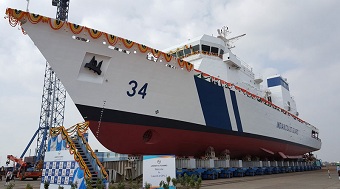 The Maharashtra government has said that Rs 5 crore have been allocated to the Fisheries Department to clear the dues of the private guards deployed to secure the states coastline.
Animal Husbandry, Dairy Development and Fisheries Minister Mahadev Jankar, who made the announcement in the state Legislative Council, also said that the dues of the guards will be cleared next month.

An official had yesterday said that the private security guards deployed in the coastal districts – Mumbai, Mumbai suburban, Thane, Palghar, Raigad, Ratnagiri and Sindhudurg – have notï¿½been paid salaries for the last six months (from September 2017). Raising a query during the Question Hour, NCP member Narendra Patil sought to know why the guards were not paid their salaries. He said after the 26/11 Mumbai terror attacks, the fisheries department was asked to rope in security guards at sensitive spots along the coastline.

Minister of State for Fisheries Arjun Khotkar said based on the recommendations made by the Coastal Security Committee formed under the then chief secretary, the department had hired 296 guards, including 23 supervisors. “525 landing spots were identified, of which 91 were found to be sensitive. Therefore, private security guards were deployed by the department as suggested by the committee,” Khotkar said.

Shiv Sena legislator Anil Parab said guarding the coastline was the responsibility of the Navy, Coast Guard and police and the fisheries department did not have the expertise in combating terror attacks. “These guards neither have the required training, nor the necessary equipments to guard the coastline. They say once they go out for patrolling, they have no guarantee of their return. Then how can they ensure safety of the citizens?” he asked.

The responsibility of providing security should be left to the Home Department, he added.
In his reply, Khotkar said the guards are trained for five days in Khandala before being sent on the field. PWP member Jayant Patil said the guards have not been paid for the last six months and that the finance minister has assured him they would be paid in April. In response, Jankar said, “The finance department has allocated Rs 5 crore to the fisheries department for the payment of these guards. All the pending dues will be cleared soon”.