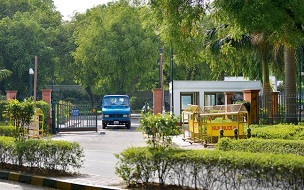 The government aims to upgrade security at the prime minister’s residence with a new Perimeter Intrusion Detection System (PIDS) to help keep watch over the complex at 7, Lok Kalyan Marg (LKM). It will be indigenous in nature with the government specifying that all key components have to be “Indian made”. The Special Protection Group (SPG) will be overseeing the installation and commissioning of the PIDS by mid-2018, said people with knowledge of the matter. The system will have the latest sensors that will help detect any intrusion attempt into the complex through the 2.8 km perimeter. Given that the area has busy thoroughfares such as Lok Kalyan Marg and Teen Murti Marg running alongside, security concerns have always been high.

“All major systems and subsystems of PIDS should be of Indian make and the make/model of the same should be reflected while making a bid,” the SPG has specified in bid documents issued last week.

The winning bidder will have to train 10 SPG officers for operating the system once it’s up and offer round-the-clock maintenance. The PIDS has to be installed and commissioned within three months of the work being awarded by the SPG. Every prospective bidder will have to provide a full demonstration of the system to the SPG as part of the selection process.