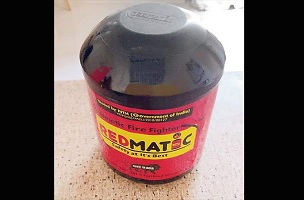 The destruction of property in fire, especially that caused during law and order issues, and the wastage of water used to douse it, have prompted two Kolhapur-based youths to come up with what they call ‘fireballs,’ to fight it. The fireballs which they have named Redmatic, are cylinder-shaped containers filled with monoammonium phosphate, that can be thrown into a fire. The heat causes them to explode, spreading the dry chemical, which douses the fire.

Sagar Raskar, 32, and Pankaj Shelke, 30, developed the fireballs in 2018 through their company, Ocean Fire, that manufactures fire-fighting equipment. Raskar said, “Many a time, after mobs get agitated, they target public property, setting fire to it. That bothered me a lot and we started researching and found a similar product in China. We decided to make it in India and did it in the span of a year.” He added, “We created a cylinder-shaped body so it can be easily thrown in a fire or kept as fire safety equipment. We gave free demos and samples to police.”

Sarang Sagaonkar, business head of Ocean Fire, said, “The product weighs 1.3 kg, costs Rs.3,930, and has a shelf-life of five years. It is eco-friendly and is effective on fire caused by liquids, gases and electrical blazes. It also saves water.”

Vishwas Nangare-Patil, Special Inspector-General of Police, Kolhapur Range, instructed that 1,000 fireballs be purchased as security for the Koregaon-Bhima battle memorial event. On January 1 last year, violence broke out during the 200th anniversary of the battle of Koregaon-Bhima. Many vehicles and other public property were destroyed. Against this backdrop, this year, the police and administration provided security to ensure the 201st anniversary was observed without incident.

Nangare-Patil said, “I happened to see a demo of Redmatic and thought it could be of good use to our department. We took along 1,000 of these fireballs as a precautionary measure for the security of the Koregaon-Bhima battle anniversary. Fortunately none of them were used but we will distribute them to our five major units in Pune, Sangli, Kolhapur, Satara and Solapur.”