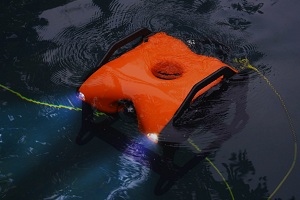 India’s first underwater robotic drone developed at a hardware incubator here, which can send real-time video of ships and other underwater structures to help with their repair and maintenance, was launched recently. It was handed over to the Naval Physical and Oceanographic Laboratory (NPOL) of DRDO.

The first commercial Remotely Operated Vehicle (ROV)/underwater drone, EYEROVTUNA, was developed by EyeROV Technologies, a company incubating at Maker Village which is said to be the largest hardware incubator in the country. NPOL, a laboratory of Delhi-headquartered Defence Research and Development Organisation (DRDO), placed the first order of the product, a Maker Village release said. The development of the product of EyeROV was largely supported by Kerala Start up Mission (KSUM) through various schemes.

The drone will be used by NPOL for research and development activities which in turn would result in commercial product for defence purposes. The robotic drone, developed by Johns T Mathai and Kannappa Palaniappan P of EyeROV Technologies, can be navigated up to a depth of 50 metre to take real-time HD video images to examine ship hulls or undersea cables or bridge moorings, eliminating the need for costlier and riskier manual inspection by divers, the release said.

EyeROV, which was tested on India’s first solar ferry in Kerala’s Vaikom, offers high manoeuvring capability at low cost and can be put to uses ranging from inspections of ship hulls, ports, dams and nuclear power plants, to search and rescue, naval mine detection and ocean studies, it said. C Balagopal, Founder, Terumo Panpol launched the product.