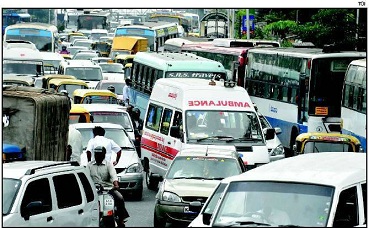 The Delhi Police have suggested the installation of front-facing CCTV cameras on emergency vehicles. These include first-response service providers across the spectrum such as ambulances, fire tenders, disaster management vehicles, and police patrol vans. According to Muktesh Chander, Special Commissioner of Police (Traffic), who also heads the technical committee of the Delhi Police, the installation of cameras on such vehicles could serve a variety of purposes ranging from instilling lane-discipline in drivers to the retrieval of impeccable evidence from crime scenes.
As many as 50 prominent city stretches have been designated ‘No Tolerance Zones’ for lane discipline enforcement by mobile traffic teams and chase-and-challan squads. They work in tandem with one team spotting lane violations and relaying information to another which would then chase down the violator for on-the-spot prosecution.

The Traffic Police has evolved a pattern for the movement of vehicles across categories under the provisions of the Rules of Road Regulation, 1989, as well as the Delhi Motor Vehicles Rules, 1993. This consists of the extreme left lane, which is the bus lane, for the plying of buses as well as light four-wheeled transport vehicles, including four-wheeled goods carriers; the next lane being reserved for three-wheelers. For motorised traffic other than transport vehicles and goods carriers, the extreme right lane on all roads with a provision of a central median must be used.