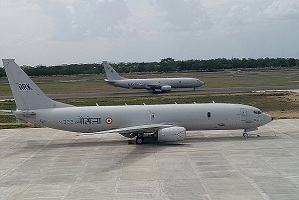 The Indian Navy has announced an extensive upgrade in the perimeter security of its major air stations around the country to protect valuable assets, including the Poseidon-8I long-range maritime patrol aircraft and Mig-29K fighter jets.

The report citing sources close to the developments said that the Navy, last week, had inked a Rs 700 crore contract for the naval airfield integrated security system with Bharat Electronics – a Public Sector Undertaking.

However, the contract for the larger project to enhance security at the 54 main flying bases of Indian Air Force (IAF), which is expected to cost an estimated Rs 150 crore per airbase, is yet to be finalised. The new integrated security system for Navy will include “smart fences” with CCTV cameras, motion-detectors, infrared devices, thermal and other sensors, backed by other surveillance devices and drones.

“This comprehensive multi-layered security system, with real-time monitoring through state-of-the-art command and control centres, will help guard the naval air stations much better against terror attacks,” a source was quoted in the report as saying. According to the report, the new security system will be installed in naval air stations located at Visakhapatnam (INS Dega), Mumbai (INS Shikra), Arakkonam (INS Rajali) and Goa (INS Hansa) by January 2020 while Kochi (INS Garuda) and Port Blair (INS Utkrosh) will get it by July 2020.