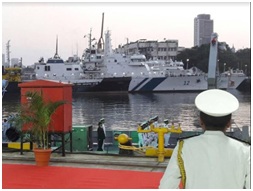 India is now left with just four old minesweepers, which are specialised warships used to detect, track and destroy enemy mines to keep harbours and shipping traffic safe. But the long-pending Rs 32,000 crore deal to build 12 advanced mine countermeasure vessels (MCMVs) at Goa Shipyard with South Korea’s help is yet to be inked.

This alarming operational gap comes at a time when Chinese nuclear and conventional submarines, which can quietly lay mines to choke Indian harbours, are stepping up their deployments in the Indian Ocean Region (IOR). At least seven Chinese submarines have been tracked by the Indian Navy in IOR since December 2013.

Two of the six remaining minesweepers acquired from the erstwhile Soviet Union in 1986-87, INS Karwar and INS Kakinada, were decommissioned at the Mumbai naval dockyard on recently. Navy chief Admiral Sunil Lanba, apart from grappling with the operational void, must have bid adieu to the old warhorses with a heavy heart also because he was INS Kakinada’s second commanding officer. The Navy, in fact, requires 24 MCMVs to effectively guard the west and east coasts. Adequate number of submarines, multi-role helicopters and MCMVs have been right on top of the Navy’s modernisation wish-list for well over a decade now, but to no avail.

Even if the contract with South Korea for the 12 MCMVs is inked this year, the first specialized warship will roll out only by 2021, at the earliest. The plan is for the other 11 MCMVs to be delivered at nine-month intervals to complete the entire project by 2026. But this will require some effort. “Price negotiations for transfer of technology of the MCMVs between Goa Shipyard and Korean shipyard Kangnam are in the final stages. Thereafter, the commercial proposal will be submitted to the defence ministry and Cabinet Committee on Security for the final approval,” said an official.