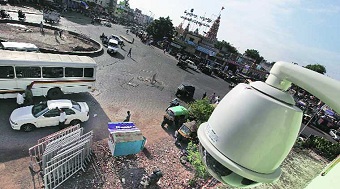 The Delhi Police has access to footage from over two lakh CCTV cameras installed under the Nigahen scheme. In a report submitted to the Lieutenant Governor, police said it has 1,054 cameras from which the department receives direct feeds, which are monitored by a central control room. Police would purchase 1,000 body-worn cameras for PCR staff and 1,000 more vehicle-mounted cameras to be fitted on top PCR vans. The cameras would have night vision capabilities and can pan 270 degrees to record footage.

Apart from this, police are in the process of installing 10 cameras each in 182 police stations. Of this, 118 police stations already have installed them. In its report, police said they have direct access to 2,03,305 cameras installed by the DMRC, NDMC and DIAL, adding that all these have helped solve several cases last year. A number of market associations and other stakeholders are also in the process of installing more CCTVs. Police have in fact called for a coordinated approach towards installing cameras by other agencies.

“It is important that relevant agencies, especially the police should be consulted while installing CCTV cameras. There should be an operating procedure that needs be followed. For example, for preserving and accessing footage, only authorised person should be consulted,” cops suggested in the report. During the meeting at the LGs house, police and the other agencies have agreed to lay down a standard operating procedure for installation, operation and maintenance of the cameras. Police said the cameras can help bring down petty crime, particularly in car parking and public transit areas. Micro-level analyses of aspects like environmental features, camera line-of-sight, enforcement activity, and camera design suggest that the power to deter crime also depends on how the CCTV sites are chosen, and police operations designed