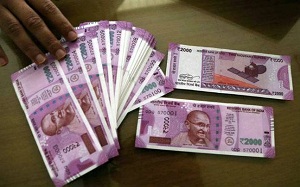 The government plans to change security features of higher denomination banknotes of Rs 2,000 and Rs 500 every 3-4 years in accordance with global standards in order to check counterfeiting. The move comes in the wake of recovery of a large amount of fake Indian currency notes in the last four months after demonetisation. The issue was discussed threadbare at a high-level meeting  attended by senior officials of the ministries of finance and home, including Union home secretary Rajiv Mehrishi. Advocating the move, home ministry officials said most of the developed countries change security features of their currency notes every 3-4 years and therefore, it is absolutely necessary for India to follow this policy.

The change in design of Indian currency notes of higher denominations was long due. Till it’s demonetisation, there had been no major change in the Rs 1,000 note since its introduction in 2000. Changes in the old Rs 500 note, which was launched in 1987, were carried out more than a decade ago. The newly introduced notes had no additional security features and were similar to those in the old Rs 1,000 and Rs 500 notes, officials said. A close look by the investigators on some of the recently seized fake notes found that at least 11 of the 17 security features in the new Rs 2,000 notes had been replicated.

These included the transparent area, watermark, Ashoka Pillar emblem, the letters ‘Rs 2000’ on the left, the guarantee clause with the Reserve Bank of India Governor’s signature and the denomination number in Devanagari on the front, officials said. Besides, the motif of ‘Chandrayaan’, the ‘Swachh Bharat’ logo and the year of printing had been copied on the reverse side. Although the print and paper quality of the seized counterfeits was poor, they resembled genuine notes. The officials said the change of security features of currency notes in every 3-4 years will lead to curbing of counterfeiting to a great extent. Those who were arrested recently along with fake notes with face value of Rs 2,000 have told investigators that the notes were printed in Pakistan with the help of the Inter Services Intelligence (ISI) and had been smuggled into the country through Bangladesh, the officials claimed. A study conducted by the Indian Statistical Institute, Kolkata, in 2016 pegged the value of fake Indian currency notes in circulation at Rs 400 crore.