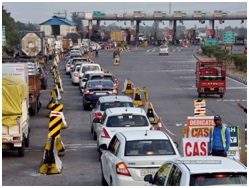 There might soon be no toll plazas across India’s national highways. The government is working on replacing the toll plazas with automatic number plate reader cameras. These cameras will read the number plates of the vehicles and automatically deduct the money from the owner’s bank account. A pilot of this is already underway, according to the union minister for road transport and highways Nitin Gadkari.

“Now, the plan is to remove toll plazas and put cameras, which will read these number plates and toll will be deducted from the account directly. We are also doing a pilot of this scheme. However, there is one problem — there is no provision under the law to penalise the vehicle owner who skips the toll plaza and does not pay. We need to bring that provision under the law. We may bring in a provision for cars which do not have these number plates to get them installed within a certain period of time. We will need to bring in a Bill for this,” Gadkari was quoted as saying.

FASTags have reduced the average time taken by a vehicle to cross a toll plaza. It takes nearly 47 seconds for a vehicle to pass using a FASTag. In an hour, nearly 260 vehicles can be processed. On the other hand, the manual toll collection lane only processes 112 vehicles in an hour.

Nearly 97 per cent of the total toll collection in India takes place through FASTags. Out of Rs 40,000 crore, only 3 per cent is collected via cash or card. FASTags were made mandatory on February 16, 2021, the report further said.

However, some problems still remain with FASTags. Users with low balance enter the plaza lanes, resulting in congestion. Also, because of internet connectivity issues at some plazas the status of low balance FASTag is not updated to active FASTag quickly, leading to jams.
Sometimes, FASTags are also not fixed properly on the vehicle by the users, leading to delays.

With automatic number plate readers, the processing time is expected to fall further, but much will depend on the implementation. IE quoted an expert as saying that if there is something apart from the number written on the plate, the camera might face difficulty in reading. He further added that in India we need more than one way of collecting toll tax to ensure “minimal loss of revenue”.