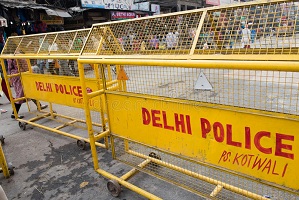 Lieutenant Governor Anil Baijal has directed Delhi Police not to place barriers on the city’s roads without staff manning them. The lieutenant governor also directed that reflective tapes should be placed on barriers to avoid freak accidents.

The directive came months after a 21-year-old man riding a motorcycle had died in a freak accident after his neck got stuck between a chain used to tie two police barricades in northwest Delhi’s Subhash Place. The directions were issued at a meeting on law and order, which was attended by Chief Secretary Anshu Prakash, Additional Chief Secretary Manoj Parida, Police Commissioner Amulya Patnaik and other senior officers.