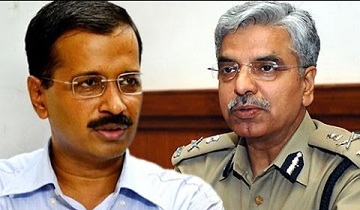 Delhi Chief Minister Arvind Kejriwal’s attempt to have a say in Delhi Police matters seems to have failed with the police virtually refusing to share with him decisions related to transfers and postings.  Kejriwal had written to Delhi Police Commissioner B S Bassi last month raising several issues related to policing. Citing the President’s order of September 24,1998, Kejriwal had demanded that a copy of the transfer and posting policy of Delhi Police be marked to his office, and also a list of officers serving in their present posts despite having completed their tenures, and the names of all SHOs and traffic inspectors together with the dates they joined their current posts.

Kejriwal had also demanded a list of dark spots in the city and accused the police of not doing its duty, saying ‘complaints’ were received regularly about non-registration of FIRs and non-accessibility of beat constables. He also sought to install CCTV cameras inside police stations.  Delhi Police sent a detailed reply on the CM’s three demands last week.

The police have bombarded the Delhi CM with hundreds of pages giving facts and figures on the demands raised by him including details of dark spots, which, police claim, are shared on daily basis with the government and civic agencies. Senior officials said Delhi government and agencies like municipal corporations, PWD (which comes under Kejriwal) and others are apprised regularly about dark spots with requests to properly illuminate those stretches but nothing happened on the ground.

There are over 1,500 dark spots in Delhi and the figure keeps changing regularly. After the Nirbhaya incident, Delhi Police had a series of meetings with different agencies and Delhi government to illuminate all dark stretches but the problem persists.