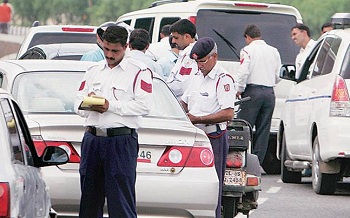 Delhi Traffic Police are facing a severe staff crunch, and traffic violators are getting away with their offences as a result. According to the latest data, the number of challans issued by the traffic police this year has fallen during the summer months of this year. The figure for June-August 2015 is nearly 65 per cent less than that of the same period last year. Traffic data shows that until May this year, traffic police issued almost three lakh more challans than last year.

In January-May 2014, they had issued 17 lakh challans, but this year the figure went up to 20 lakh during the same period. But after that, the traffic cops managed to fine only four lakh people for violating traffic rules.  During June-August last year, the cops had issued challans to almost 12 lakh people. According to sources, Delhi Traffic Police have nearly 5,500 personnel. Earlier the entire staff used to be on duty during the day, but in order to curb deaths due to road accidents, between 40 and 50 per cent of the staff were shifted to night duty.

According to police, only around 3,000 personnel are available for day shifts. Also, most of the time, these cops have to regulate traffic instead of catching violators.
“Less challans do not mean Delhiites are not violating rules, it is due to various issues with staff deployment. Day-time duty is important as the maximum number of vehicles is on the roads and people violate traffic rules fearlessly. We have to make do with almost 30 per cent less staff due to night deployments,” a senior officer said. However, the Delhi Traffic Police head said the dip in issuance of challans is due to a switch of focus. “Our main focus area is to regulate traffic. We have given instructions that during peak hours, all staff will help in regulating traffic instead of issuing challans. Smooth traffic in Delhi is very important, but we are also working on other issues,” Special Commissioner (Traffic) Muktesh Chander said.

According to the data, over six lakh people were found jumping traffic signals in 2014, but this figure has gone down 50 per cent this year. Until August 31, traffic police have challaned only three lakh people for the same violation. Similarly, police officers found 5,42,924 cars parked improperly in 2014, but this year only four lakh were fined for improper parking. Police officers have also been unable to challan a large number of trucks and buses violating traffic rules.

According to sources, the Ministry of Home Affairs and the Delhi Police top brass are not keen on increasing the number of staff in the traffic department. However, by increasing vigil during night-time hours, the police have managed to cut the number of people killed in road accidents.