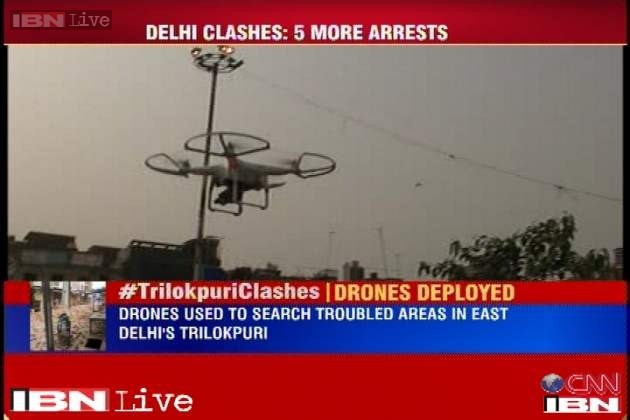 Drones were used by Delhi police recently to keep an eye on violence-hit Trilokpuri as hundreds of police personnel marched through the byways of the east Delhi colony where over 70 people were injured in communal clashes. The unmanned aerial vehicles (UAVs) were used for the first time to monitor a communally-sensitive area in the city, though Delhi Police tested them while providing security at Ramlila and Durga Puja venues. “We could spot the houses which were burnt down during attacks. To ensure that no weapons were hidden under the debris, we scanned the spots with the drones and asked the homeowners to clear these areas,” said Sanjay Baniwal, Joint Commissioner of Police (East).

The technology came as a big help to officials as they did not have to get warrants to search the houses, sources said. “In a post-riot situation, randomly breaking into houses for inspection can do more harm than good. This surveillance mechanism helped us avoid violent repercussions,” Baniwal added. The UAVs helped Delhi Police officials locate about 70 bags full of bricks, possibly brought in to cause further damage to shops and vehicles, from the eight blocks of the colony worst affected by the clashes.

Three bags packed with glass bottles, 30 knives and five swords were also spotted by the drones, leading to five people being arrested. “Though an initial search by a drone had revealed the presence of such weapons, we understood that people had stocked them due to mutual suspicion. Bearing this in mind, we had made several announcements, and people complied as many of them left bricks and stones on the streets which were quickly removed,” Baniwal said. Delhi Police officials have asked Defence Research and Development Organisation (DRDO) to provide them another drone following this success, sources said.