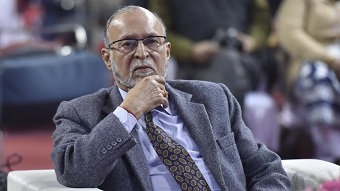 Lieutenant-governor Anil Baijal has directed Delhi Police to conduct an analysis of all criminal cases in the Capital that end in acquittals. The L-G asked the police to consult all the stakeholders involved and come up with remedial measures to increase the conviction rate at the weekly law and order meeting.

Delhi Police chief spokesperson Dependra Pathak said, “National Crime Records Bureau figures show that in the past few years, the conviction rate of all crimes registered in the capital was around 47 per cent annually, which means the remaining cases either resulted in acquittals or the accused were discharged during the trial.”

Pathak, who attended the meeting, said that Delhi’s acquittal rate is lower than the national average and the emphasis from the L-G was to scientifically analyse each case so that the number of conviction goes up. “This is to plug the gaps in investigation if any. We will now consult the prosecution, legal and scientific experts and come up with a roadmap to conduct the study,” said Pathak.

A statement issued by the L-G office mentioned that the analysis should be undertaken in consultation with the Directorate of Prosecution (DOP) and other agencies concerned.
Another senior police officer said that there were several factors that kept the conviction rate almost stagnant around the halfway mark in the past few years. According to him, a longer period of trial and poor evidence gathering were handicaps in achieving a better conviction rate.

“The time given to us for filing the charge sheet for a case like murder is 90 days, but the courts may take years to decide the fate of the case. The investigating officer changes and with the passage of time, he has new roles and responsibilities and may not even have the time to probe the case with the same earnestness as in the beginning,” said the officer, who did not wish to be named. He added that after three or four years, the investigating officer may not even remember the facts of the case, which works in the favour of the accused. He further added that the prosecutors sent by Delhi government also keep on changing while despite the delay in the settlement of the case, many accused have the same lawyer. “So the arguments presented by our prosecutor may not be as strong as the defence and cases do fall due to this too,” said the officer.