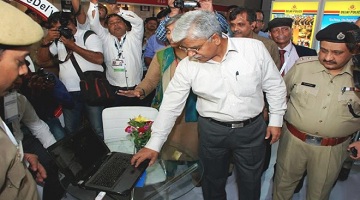 From high-resolution face detection cameras and devices that can create 3D crime scenes to shock shields used to disperse a mob, a variety of gadgets were on display at the International Police Expo that took place recently in New Delhi. It focused on all the aspects of security, including surveillance, cyber security, IT and communications, forensics, traffic and riot control. The two-day expo was aimed at providing efficient, economical and innovative solutions to handle crime situations and modernize the police of the country.

“We can take the database from the police and feed the wanted ‘faces’ in the computer. The cameras use the info and detect similar faces in the crowd. The results so far have been 100% accurate,” said Abhay Ranjan, head of business development at ACKTRON, which is marketing a German-made face detection technology. Ranjan added the DIG of Andhra Pradesh Police and senior officers of the Tamil Nadu Police had shown interest in the technology.

According to Abhinav Anand of SRG, an Indian firm involved in design and manufacture of defence products, technology can make policing more efficient. “We have shock shields for riot control, portable equipment to modify a gun, night vision glasses, body cameras and other equipment. A cop can easily carry these light-weight items, which will not only make him/her look smarter, but also help the personnel operate with accuracy,” he said.

SRG also introduced a kit named Rakshu for women’s safety. Priced at Rs 5,000, it has a flash light-cum-stun gun that is capable of generating a shock as high as 55,000 volts. The kit also carries a pepper spray, an alarm key-ring and an expandable baton.

Apart from these, equipment to deal with disaster situations, unruly mobs during riots, pepper grenades, spying devices and hand water purifiers were also displayed at the expo.