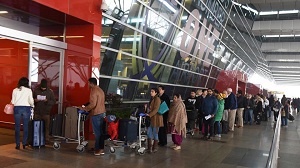 Passengers with disability will no longer have to remove their prosthetic limbs for X-ray screening at airports. The Central Industrial Security Force (CISF) has decided to do away with the ‘humiliating’ practice across airports in the country. In addition, the CISF has also decided not to screen wheelchairs through X-ray as it causes inconvenience. In both the cases, handheld explosive trace detector (ETD) will be used and only in rare cases, where security personnel feel the need, will they request passengers to remove the prosthetic.
On the request of CISF, Bureau for Civil Aviation Security (BCAS) had constituted a committee which suggested alternate ways of screening. BCAS had also invited suggestions to prepare an SOP for frisking of such passengers.

“We have conducted various meetings and a final meeting was conducted with every stakeholder, including some disability rights activists. BCAS has made necessary changes in the existing act and our job is to sensitize our personnel at the airports. CISF will issue dos and don’ts to facilitate passengers with disability,” OP Singh , DG CISF, said. Earlier, passengers with disability had to remove their prosthetic limbs put it in the X-ray machine. Many passengers felt the procedure was humiliating. Rules also required passengers to vacate their wheelchair for screening by CISF.

“We have ETD at every airport and our staff will carry out the checks with it. Screening of prosthetic appliances covered with foam padding in which the steel rod is not visible, will include visual inspection, ETD checks and X-ray screening, if deemed necessary,” Singh said. BCAS has also said that a passenger with prosthetics or braces/support appliances should inform the concerned airline and must be accompanied by an airline representative, preferably of the same gender as the passenger. “The objective is to ensure that there is no inconvenience to the passengers with prosthetic limbs in future, but without diluting the standards of security,” said a ministry official quoting the draft SOP.